You made it to Inverskilavulin, congratulations! You’ve navigated the winding mountain roads of Glenloy, checked in at your lodge, and unpacked the suitcase. Maybe you’ve freshened up from your journey with a relaxing half hour in the hot tub. Now what?

Few of us have time to pore through dozens of websites and plan out each day of our trip. And you don’t want to waste valuable holiday time by looking for answers once you’ve arrived.

Well that’s where we come in! We’ve put our thinking caps on and narrowed down the plentiful options available to just a few of our favourite day trips. Fret no more about finding things to do with these handy ideas…

Can you really say you’ve been to the Highlands if you’ve not gone looking for Nessie? That’s not for us to decide, but it would be a shame not to explore one of Scotland’s most iconic spots while you’re nearby.

The deep, dark waters of Loch Ness are believed to be greater in volume than all the lakes of England and Wales combined. 22 miles long, 1.5 miles wide, and over 200 metres deep, the vastness of the loch covers a substantial enough area to be enjoyed by visitors of all kinds.

Sonar-equipped boats provide kid-friendly cruises to seek out the elusive monster. Lovers of history and culture, meanwhile, can get a taste of the 18th-century Highlands at the Clansman Centre or check out what remains of Urquhart Castle, where you learn how the tranquil site you see today was once the bloody epicentre of Highlander struggle.

But it’s the romantic image of these ruins, perched handsomely above the shore, that symbolises the most appealing features of Loch Ness. Picture-perfect beauty, mile after mile, draws walkers, cyclists, and those simply wanting to soak up the breath-taking atmosphere. The High Route offers glorious views of this scenery, while the dedicated 360 trail gives options for hikers and bikers of different levels to spend a day exploring the loch’s periphery.

Loch Ness itself forms part of a much larger landscape that effectively cuts Scotland in two from coast to coast. The enormous rift valley known as the Great Glen is visible from space, though we recommend you enjoy its treasures from a wee bit closer!

While the A82 is the quickest way of traversing the valley, you can actually go from one end to the other entirely by boat. The Caledonian Canal connects the gaps between lochs Lochy, Oich, and Ness, offering sailors the possibility of making it from the Atlantic to the North Sea without setting foot on dry land.

That involves more time than a day trip allows of course, but even a few hours on a narrowboat is an enchanting way of slowing things down and giving yourself time to properly take in the majestic surroundings – that’s if you don’t spend too long negotiating the eight-lock boating marathon that is Neptune’s Staircase at least!

Just before the A82 swerves off to the north-east you find yourself in front of the huge Commando Memorial. Dedicated to the servicemen who trained at nearby Achnacarry and would go on to make the ultimate sacrifice in WWII, the 5m statue is one of the most important landmarks of modern history in the Highlands.

It also represents a crossroads of sorts and those who resist the temptation to follow the crowd towards Inverness, instead continue directly towards the remote and wild Loch Arkaig. This hidden gem rewards visitors with sublime woodlands of sycamore, ash, and ancient Caledonian pine trees, the last of their kind in the country.

A delightful walk along the northern shores of the loch reveals a habitat enjoyed by ospreys, otters, and even red deer. But the highlight of your day out here is undoubtedly Eas Chia-Aig, a series of waterfalls that you might recognise from the Rob Royfilm. The final cascade plunges into the Witches’ Cauldron, whose name and backstory are more intimidating than the scene of tranquil beauty in front of you.

An alternative path on the southern shores leads you through willows and birches for several miles before reaching Invermallie, where a remote bothy provides timely respite for hikers headed for the Knoydart peninsula…

Known as Britain’s last great wilderness, Knoydart is not easy to get to. Cut off from the road network, your only chance of reaching this peninsula is with a 10km hike or the more popular boat trip from Mallaig.

Upon arrival though, you’ll understand exactly why residents revel in their remoteness. With landowners committed to preserving and enhancing the spectacular landscape, risks of deforestation have been reversed and native plant and animal species returned, giving hikers the chance to witness everything from dolphins to golden eagles to roe deer in the space of a single day.

The incredible biodiversity and rugged grandeur of this wild terrain makes a day in Knoydart unlike any other you can find in Britain.

Grey Corries and the Nevis Gorge

If you look past the Commandos Memorial statue, your eyes will likely train themselves on the Grey Corries. This gleaming ridge of four quartzite peaks boasts some of the tallest in the country, almost as high as the nearby Nevis Range, but not as accessible.

Ascending all four munros in a single day is possible, but better left to climbers with some degree of experience. A more interesting option is to approach the pointed top of Stob Ban from the Nevis Gorge instead.

A spectacular two-mile walk through Glen Nevis, a familiar playground to mountaineers, bikers, and white-water rafters alike, leads you to a meadow where views open up dramatically and a thunderous roar tells you you’ve arrived at Steall Falls, Scotland’s second largest waterfall with a 120m drop.

This colourful scene may feel familiar due to its appearance as a background for quidditch matches in multiple Harry Potter films – we don’t recommend trying any broomstick lessons of your own here, but if you’re not careful crossing the three-wire bridge above the Water of Nevis you may end up on an inadvertent ‘flight’ regardless! 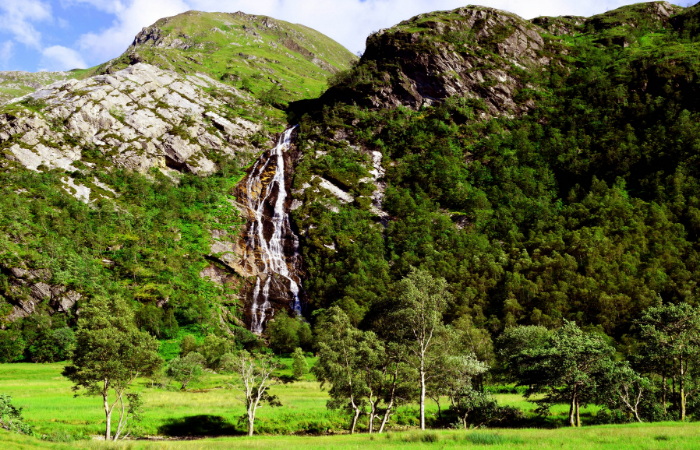 Spring towards the Sunshine